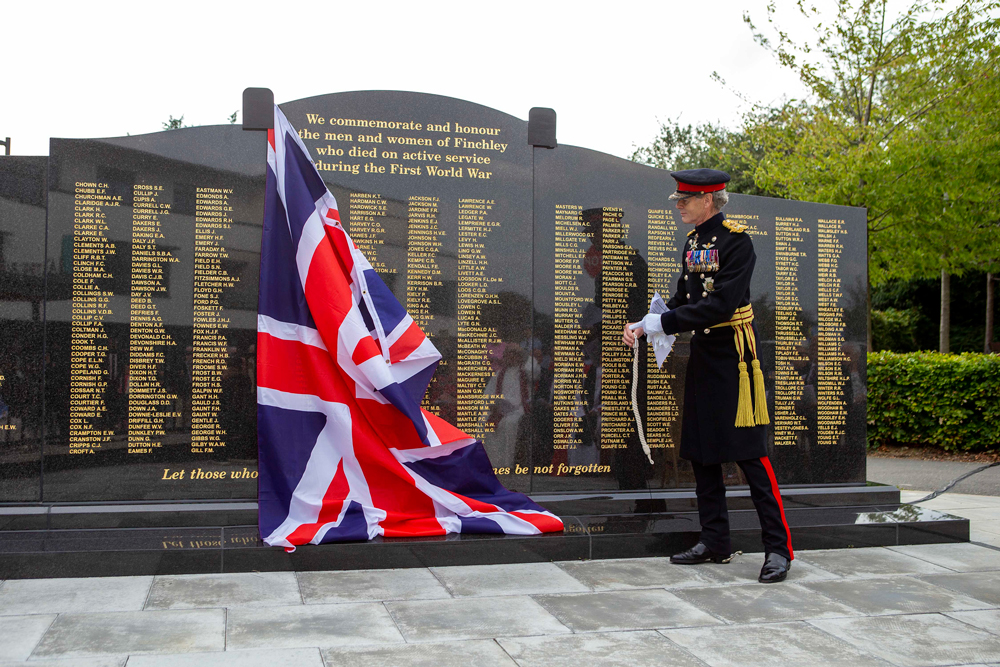 On 26th September a grand ceremony took place at the new Finchley War Memorial to dedicate a brand new edifice. Finchley missed out on a public war memorial, which was erected by virtually every other London district, because it was decided to dedicate a memorial hospital instead.

The Province of Middlesex has donated £12,500 towards the £105,000 cost of the memorial; £7,500 from Middlesex Masonic Charity (MMC), and £5,000 from the Middlesex Province Relief Fund (MPRF). As a major donor the names of these charities have been acknowledged on a plaque on the memorial.

It is a stunning new memorial erected in the grounds of Finchley Memorial Hospital, with all these missing names engraved in gold leaf on dark grey polished granite. The memorial commemorates, by name, the 1307 men and women from Finchley and Whetstone killed on active service in the two World Wars. This project has taken over six years to come to fruition.

The memorial was unveiled by General Sir Adrian Bradshaw KCB OBE DL, Governor of the Royal Hospital Chelsea, who was accompanied by several scarlet-coated In-pensioners. The consecration ceremony that followed the unveiling was led by the Bishop of London, The Rt Revd and Rt Hon Dame Sarah Mullaly DBE.

There were many dignitaries present, including the two local MPs, the Mayor of Barnet, Councillors, Deputy Lieutenants, and representatives from other faiths, St John Ambulance, Police, Ambulance and Fire Services.

Ten Standard Bearers represented a wide range of ex-service organisations in the Borough and beyond.

Also present was the driving force behind the creation of the memorial, Catherine Loveday, whose father died in action at sea during WW2. Catherine wondered why her father’s name, along with other Finchley war dead, did not appear on any local public war memorial, and determined that the situation should be remedied. With the assistance of Mick Crick, she painstakingly researched the missing names from numerous sources.

The Masonic Province of Middlesex is proud to have made this significant contribution to commemorate a large number of Finchley residents, who had given their lives in the two World Wars, and for 75 years have had no grave or memorial where their families can pay their respects.

All images courtesy of Simon O’Connor and Gerald Alderman and all are Copyright of the BWMA.
See the full gallery HERE